an Epic! Give Away! 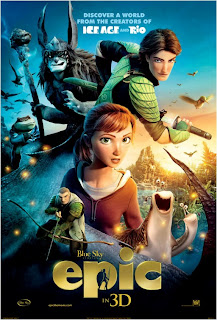 Are you as excited about this film as we are?

The complementary screening will be taking place on Saturday, May 18th (10:00am) at Showplace ICON. For your chance to win a complementary family four pack, enter here http://tinyurl.com/cgojzkz before May 15th!

Synopsis:
What is Epic? EPIC is a 3D CG adventure comedy that reveals a fantastical world unlike any other. From the creators of ICE AGE and RIO, EPIC tells the story of an ongoing battle between the forces of good, who keep the natural world alive, and the forces of evil, who wish to destroy it. When a teenage girl finds herself magically transported into this secret universe, she teams up with an elite band of warriors and a crew of comical, larger-than-life figures, to save the world……and ours!

This film stars Beyoncé Knowles, Colin Farrell, Josh Hutcherson, Christoph Waltz and Amanda Seyfried. Learn all about Epic, play games, and read more about Epic characters as you get ready to experience this adventure in theaters May 24!