Shrek the Musical - A Give Away! 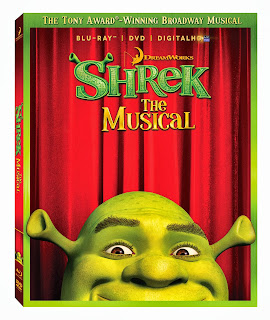 Shrek The Musical Arrives on Deluxe Edition Blu-ray™ and DVD October 15
“The best musical for younger audiences since The Lion King!”
--Time Out NY
LOS ANGELES, CA – The greatest fairy tale never told comes to life as never before in DreamWorks’ Shrek The Musical, the highly acclaimed Broadway production based on the smash-hit movie. Called a “triumph of comic imagination” (Elysa Gardner, USA Today) that “never stints on spectacle or laughs” (David Rooney, Variety), Shrek The Musical received eight 2009 Tony Award® nominations including Best Musical, winning Best Costume Design of a Musical (Tim Hatley) and received a Grammy Award® nomination for Best Musical Show Album.
Featuring a fantasic score of 17 all-new songs, Shrek The Musical was filmed on stage to capture the magic of a Broadway performance and stars an amazing celebrated cast including Brian d’Arcy James (Shrek), Sutton Foster (Fiona), Daniel Breaker (Donkey), Christopher Sieber (Lord Farquaad), and John Tartaglia (Pinocchio). The film was shot live on Broadway with 10 cameras and directed by Michael Warren. Now you can bring the magic of Broadway to your home and get the best seat in the house when the Deluxe Edition Blu-ray™ and DVD arrives on October 15th!
Fans can join in on the performance with sing along Shrek-tastic songs on the Deluxe Edition Blu-ray™ + DVD + Digital HD™ or single-disc DVD. And the Deluxe Edition Blu-ray™ goes even deeper into the fairytale’s journey, taking viewers behind-the-scenes to see how the show became a smash hit that “will make your heart dance.” (Cindy Adams, The New York Post).
Shrek The Musical tells the story of a swamp-dwelling ogre who goes on a life-changing adventure to reclaim the deed to his land. Joined by a wise-cracking donkey, this unlikely hero fights a fearsome dragon, rescues a feisty princess and learns that real friendship and true love aren’t only found in fairy tales.
The musical is based on the story and characters from William Steig's book Shrek!, as well as the DreamWorks Animation film and features a book and lyrics by Pulitzer Prize® winner, David Lindsay-Abaire, music by Olivier Award-winner Jeanine Tesori, and is directed by Tony Award® nominee Jason Moore. Shrek The Musical is produced by DreamWorks Theatricals and Neal Street Productions, Ltd.

·         Shrek The Musical Songbook  with Sing-Along—Kids and adults alike can pick their favorite song and sing along, as seven songs from the musical will have their lyrics appear on the bottom of the screen as you watch the actual musical performance on screen.  You can play all of the tunes uninterrupted or choose to randomize the musical experience with the “shuffle mode.”


How would you like to win your very own copy of Shrek the Musical?

Simply toss your name in the rafflecopter hat below! It's that simple!

*** Fox Home Entertainment is providing the DVD for the winner, as well as a DVD for my family to enjoy. ***